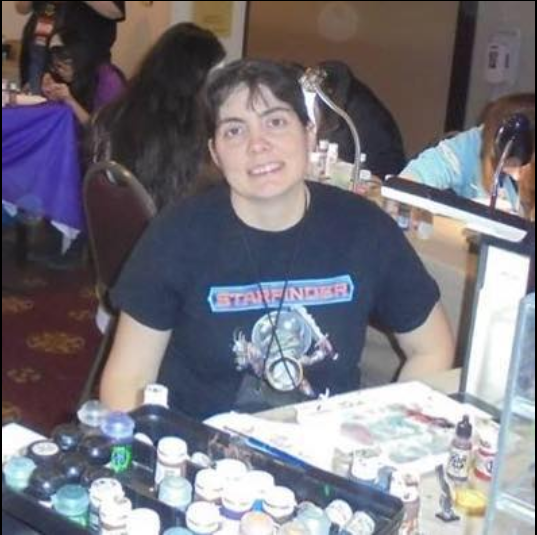 What’s something interesting that people probably don’t know about you?

That I’m kind of a real-life bard. I play the flute for and am an alto in a church choir (St. Mary’s in Winchester).

What are your top three favorite characters you’ve played and why?

The first, is my Rise of the Runelords rogue, Aleya Shadowsong, otherwise known as the Blue Shadow, a rogue who got her start as a cat burglar with a taste for the finer thing in other rich people’s lives and would leave a calling card of a piece of sheer dark blue fabric. Then one day, she broke in to the house of a government official in Magnamar and found he was a member of the Skinsaw cult. She decided to head to Sandpoint for the time being (her get away wasn’t totally clean).

The second, was a ranger I played years ago in a home-brew D&D campaign who I am bringing into PFS, Brennia D’Villeir. That adventure was crazy with far more role playing and running for our lives than actual fighting.

Finally, the third is my very long-time bard character, Taryn Emanteril Leafblade. I’ve been playing her on and off since college…. over 25 years and have enough material to fill a trilogy, which I have been writing.

One honorable mention….Tessa Heartsong, my -01 PFS bard character. How can you not love a character that blew up the ghosts in the Wardens of Sulfur Gulch with just a wand of cure moderate wounds and ends up with Jala Spirit-Eye as a prize at the end among other interesting adventures?

You’re known for painting minis – were you always this artistic or was it something you learned as an adult?

When I was about four years old, I told my mother that I was going to be an artist when I grew up. I went to college and got my degree in art education but with a focus in graphic design for my electives. When I graduated, graphic design ended up being my chosen profession and still is today. As for minis, I fell into the hobby around fifteen years ago when I was bored on a Saturday afternoon, so I pulled out a mini I had and some cheap hobby paints and painted it up. I knew nothing about painting minis, although I did have a background in ceramics, which has several techniques which overlap. I realized I enjoyed the hobby and started going to painting events and learning more about how to actually do it, including things like priming (my first one was metal and not primed and has somehow survived intact).

What inspires the characters you paint?

These days I do so much painting of characters that I or someone else is playing, so the character dictates the color scheme. However, there are times where I will look at the mini and the color scheme comes to mind immediately, sometimes it develops over time as I work on it. Of course, the internet is a fantastic resource for color schemes, and I have resorted to going there, especially if I want to paint up a monster so it looks like something out of the Monster Manual.

The most interesting times are when the painted mini inspires a character before I’ve created one. The Blue Shadow was one of these characters.

What is the favorite mini you’ve painted and why is it your favorite?

Picking a favorite mini is like picking a favorite character…. that said, I have three. The first comes from Reaper’s anniversary line from last year, the Grim Reaper. I love this one because of the deep red color scheme, and it has my favorite base I have ever created for a mini. In the large division, I love my large Reaper Cthulhu because of its sea-based color scheme which was inspired by iridescent fish. Finally, the Reaper Nativity set I had just completed due to just how happy I am with the quality of the painting of it.

How can people see your art?